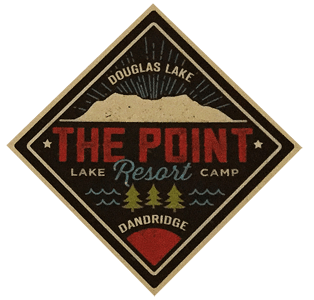 A little bit about our quaint little neck of the woods.

Douglas Lake
Douglas Lake is a man made lake. The Tennessee Valley Authority (TVA) formed Douglas Lake from the French Broad River in the early 1940s. Douglas Lake is approximately 555 miles of shoreline with twists, turns, coves and bays stretching from the confluence of the Nolichucky, French Broad and Pigeon River in Cocke County, 8 miles west to the site of the Douglas Dam in Sevier County. While creating the Douglas Dam, the TVA spent one million dollars building a dike in order to prevent the Jefferson County Seat, the town of Dandridge itself, from being completely flooded by the water of the newly formed Douglas Lake. Today, nearly 60 years later, the Dandridge Dike has become a landmark on its own and an integral part of the town itself. The dike is located above numerous historical buildings, many dating back to the 1820s, and are today used as governmental offices and small businesses.

Historical Dandridge
Dandridge has every right to call itself Historic – having been incorporated in 1793 and thus making it the second oldest city in Tennessee. Dandridge has seen plenty of history after and even before that. Spanish explorer Hernando de Soto passed through on his way to a Coosa chiefdom (now Georgia), the Zimmerman’s Island, which once held a substantial Chiaha Native American tribe, is now submerged by Douglas Lake, the 1863 Battle of Dandridge was held here (on Christmas Eve, no less)… the town was even named after George Washington’s wife, Martha Dandridge Washington. The status of “Historic” Dandridge has certainly been earned.

It follows then that Dandridge is mighty proud of its place on the National Register and shows it by holding many special events such as the Scots-Irish Festival and Christmas in Dandridge, a historic walking tour, downtown shopping that keeps quaint shops and restaurants and all kinds of things to go out and see. That’s the way we like it over here, and we’re sure you will too!

See more information on these events at www.mainstreetdandridge.com.

© The Point Resort. Site Design and Hosting by the Brainstorm Cafe